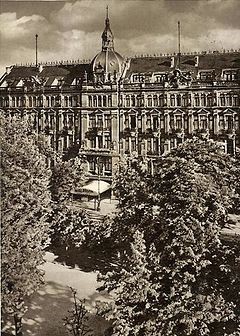 Marguerite Harrison boarded a train crowded with soldiers and workers and head to Berlin.

Along the way, she heard that fighting had erupted in the German capital between the government troops and the Communist-backed Spartacists, and she hurried toward the action. It was night when she arrived at the train station and the streets were deserted. She hailed a horse-drawn carriage and ordered the driver to take her to the only hotel she knew, the Hotel Bristol.

She flashed her newspaper credentials at the Brandenburg Gate and soldiers waved her through. But she had not gone far when she heard the crack of rifle fire. Soon bullets were bouncing off the pavement and buildings around her.

Harrison clutched her suitcase and sunk to the floor of the carriage while the driver whipped the horses to a gallop. Arriving at the hotel, the driver quickly dumped her bags at the door and sped away.

The hotel doorman, astonished to see the American woman standing in the street, pulled her inside.

Harrison took it all in stride. Later she recalled: “I had an excellent supper and was soon fast asleep in a room facing an inner court,” which was, needless to say, quieter than the rooms facing the fighting on the street.