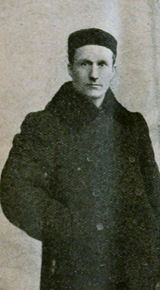 Marguerite had been in Moscow a few weeks when a frail-looking man in a sheepskin coat knocked on her door. He was Francis McCullagh, a British intelligence officer who had been left behind at Omsk when British troops retreated from Siberia. After a harrowing, three-week journey, he had arrived in Moscow without documents and was trying to persuade authorities that he was a British journalist. The Foreign Office had moved him into the guesthouse, but he doubted the Reds believed his story.

Thinking quickly, Marguerite invented a scheme to help him. She telegraphed the Associated Press to report that the “well-known correspondent of the Manchester Guardian” had arrived in Moscow from Siberia. The ruse worked, and McCullagh took up reporting in the capital, often working alongside Marguerite.

In his memoir, McCullagh painted a vivid picture of life in Moscow that winter. “It is a town of mystery and misery; of secret executions and a lawless Government; of freedom to wave red flags and preach free love, and use language which would ensure one’s instant arrest even in Hyde Park, but at the same time an irony—a tyranny which will not allow a word to be said against itself. It is an inconceivable topsy-turvydom,” he wrote.

McCullagh described the control that the Bolsheviks exerted over the foreign correspondents. Reporters were given visas to stay only for three weeks. If they did not write positive news about the Russian government or wrote nothing at all, they were expelled. Every aspect of their lives was monitored. But most insidious of all, Bolsheviks controlled journalists by sowing seeds of distrust in their work. A garbled message or a fake story could cast a journalist as a Bolshevik and thus a persona non grata in his or her own nation.

McCullagh and Harrison managed to bluff their way into an exhibition at the Kremlin where they saw maps detailing Russia’s propaganda network in Asia. Just as they were leaving, they saw Leon Trotsky striding across the courtyard.

Marguerite later recalled rushing up to the second most powerful man in Russia, introducing herself and asking him questions about the worker’s army. Just a few days later, Marguerite, McCullagh and Dr. Karlin were ordered to leave the guesthouse and move into the Savoy Hotel, a location known to house those under suspicion.