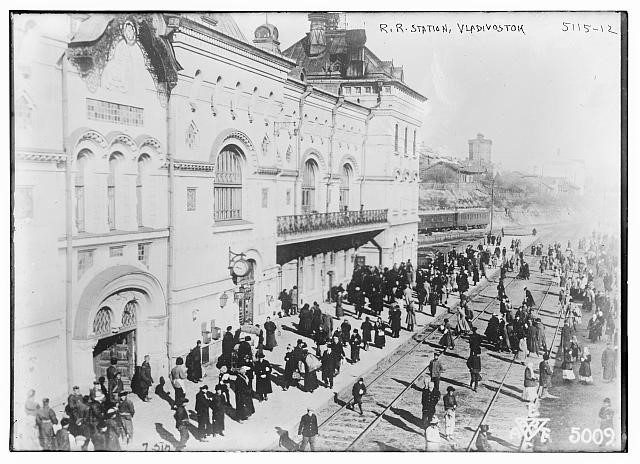 Finally arriving at the Khabarovsk train station, Marguerite squeezed through the crowd, purchased a third-class ticket, and scrambled onto the train. Before the war, the trip from Khabarovsk to Vladivostok would have taken 30 hours. Now it took five days. Fighting still continued along the route, and Marguerite had to pass through three armies to reach Vladivostok.

As the days passed, Marguerite became acquainted with her fellow travelers, many of them soldiers. She shared with them her cigarettes and chocolates and played poker with them in the evenings. But one tall, slender soldier kept to himself. When they were alone, he told her that he was a Serb who had been drafted into the army of the Far Eastern Republic and planned to desert. His goal was to reach Vladivostok, where he hoped to obtain a passport from the Yugoslav Embassy and return to his country. It was a desperate gamble. He could be shot as a deserter, captured by the Japanese, or executed as a Bolshevik spy.

Marguerite could be coldly analytical and detached from her friends and family, but she also could be soft-hearted in dealing with those she perceived as less fortunate than herself. When she was freed from Russia, she had asked that her money be donated to help children. Another time, she put dollars in the hand of a beggar sleeping in the street. On the train, she bought a ticket for an elderly peasant woman who had been robbed. Looking at the Serb soldier, she remembered her grandmother Baker, who had harbored Confederate spies in Baltimore during the Civil War. She agreed to aid the soldier, and that night she helped him burn his identification papers.

She started to doubt the wisdom of her decision when White Army guards boarded the train at a checkpoint. and inspected all of the passengers’ documents. Marguerite’s papers were in order, but the guards were suspicious of the Serbian soldier and an elderly woman who had lost her ticket. Marguerite told the officers their train had been beset by robbers who stole the documents, and she vouched that the Serb had been an Imperial soldier. Nevertheless, the White guards arrested all three of them and marched them to the staff headquarters. The old woman cried and pleaded to the saints, but the officers were unmoved. The three would have to spend the night in detention, the soldiers said.

Marguerite then took charge and demanded to see the commanding officer.

The young soldier reluctantly sent for his colonel, whom Marguerite described as an educated and reasonable man. Again, Marguerite showed an amazing talent for getting out of tight situations. She persuaded the colonel that the old woman and Serb could be trusted, and he released them.

When they reached Vladivostok, Marguerite breathed a sigh of relief that she had seen both her charges through to their destination.