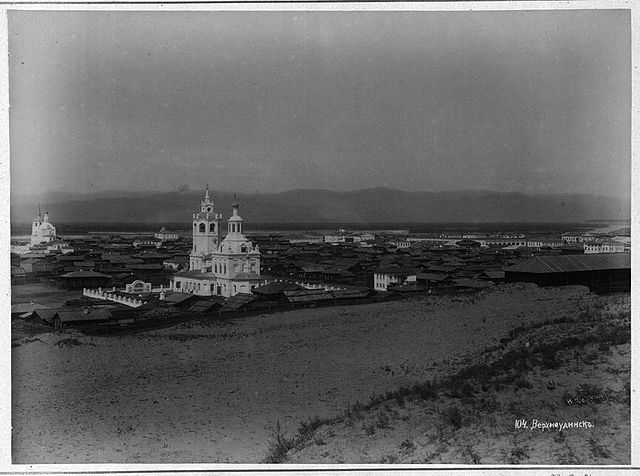 Russian officials kept a close eye on Marguerite Harrison after she crossed the border into the Far Eastern Republic. While she perceived the attentiveness as hospitality, it is likely they followed her because of orders from Moscow. When she and her guide resumed their journey to Chita, they were joined by an armed Cossack soldier carrying diplomatic mail for the Russian consulate. He also may have been sent to escort Marguerite, but he proved a handy companion, frightening off a band of robbers that tried to attack them.

The weather turned quite cold, but Marguerite was dressed warmly in a fur-lined coat and goat-skin boots. During the day she and her two companions lived on tea, rye bread, and meat dumplings called pelmeni. When they stopped in the evenings, she slept soundly, even when she had to share the floor with other travelers or, occasionally, livestock and vermin. They lodged among Old Believers, a sect that eschewed modern conveniences and adhered to customs dating back centuries. Marguerite and the other travelers had to eat at a separate table and were not allowed to smoke in the homes. One night Marguerite persuaded her host to let her sit by the stove and blow her cigarette smoke up the chimney. “He kept crossing himself all the time and saying that he was committing a sin,” she later wrote.

At last they reached Verkhne-Udinsk, where Marguerite expected to board the Trans-Siberian Railway to Chita, where she would meet U.S. diplomats Faymonville and Thomas.

Red banners hung in the streets and Marguerite assumed they were simply left over from the Revolution anniversary celebrations the previous week. But when she stopped at a guesthouse that had been recommended to her, the landlady curtly told them she had no rooms for rent. The answer was the same at the second and third houses ahe tried. Finally Marguerite went to a general store named American Trading Company, where the Danish owner told her that Communists had seized the municipal government. They were confiscating the houses and arresting suspected spies.

Realizing the danger, she asked her Cossack companion for help. He knew of a place the Communists were not likely to look—the town’s brothel. Marguerite reluctantly agreed. The proprietor offered her a room with a secure lock, and Marguerite tried to ignore the sound of revelry coming from the adjoining rooms.