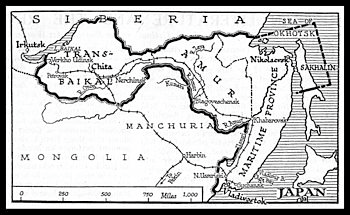 Marguerite hid in the brothel for two days until she and her Cossack companion could catch the train to Chita.. She did not know whether the Communist uprising had been confined to Verkhne-Udinsk or had swept through the entire Far Eastern Republic. Her worries grew when the next night a suspicious-looking man knocked at her door saying he was a local newspaper reporter who wanted to know her political views.

At last Marguerite boarded the train for Chita and grabbed a newspaper at the first station where it stopped. Then she learned the truth: The Far Eastern Republic had been dissolved and was now part of Soviet Russia.

Marguerite realized her situation was precarious. She telegrammed Edward Thomas, the American vice consul, and asked him to meet her at the station in Chita. She believed she would be safe under his protection. When her train pulled into Chita on Saturday, November 18, Thomas and Maj. Philip Faymonville, a military observer were waiting. They told her they thought she would be safe, but she nevertheless spent most of the day in their apartment.

The next day she felt confident enough to accompany the Americans to a dinner with officials of the former Far Eastern Republic and Russians who now were in control of the country. The Russians, including the former foreign minister, teased her about being back in Soviet Russia. Trying to dispel her worries, Marguerite asked them to check on her request for a visa to enter Russia.

On Tuesday, November 21, her Cossack friend returned to ask her for copies of photographs she had taken along their journey. They were walking to a studio to have the film developed when suddenly a Red Army soldier stopped them in the street.

“Hands up!” he ordered, pointing a revolver toward them.

Marguerite obeyed. The soldier took the Cossack’s handgun and then turned to her: “Are you Citizen Garrison?” he demanded to know.

“You are arrested,” he said.